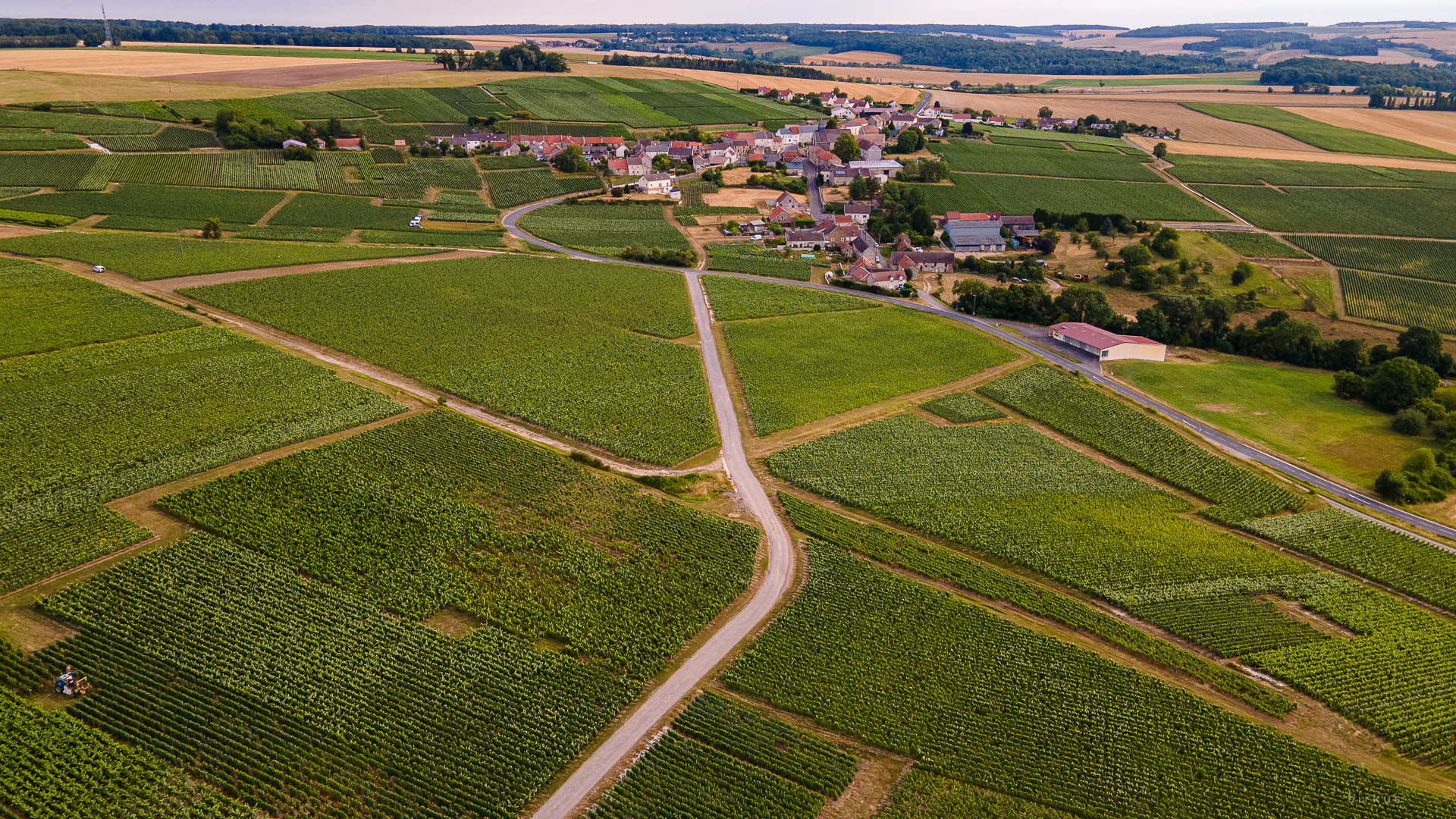 There is a wonderful and ancient story about the life of a Portuguese woman who went to Aquitaine.

Remarkably beautiful and elegant, she gave herself to Christ alone as his spouse, and was martyred for her cause in 106 AD.

In 1096, Hugues de Soissons conceded the altars of Sainte-Gemme and La Noue (Aisne) to the Clunisois priory of Saint-Germain-des-Prés in Paris.

It appeared that there had been a monastery in the Tardenois region of France at the beginning of the 12th century. Sainte-Gemme was a priory in that monastery, and its economic influence grew between 1225 and 1227. Pope Urban II mentions the Villa Sainte-Gemme, which includes a church, land and houses.

Sainte-Gemme is in the Marne department, about 24 km south-west of Reims and 15 km north-west of Leuvrigny. 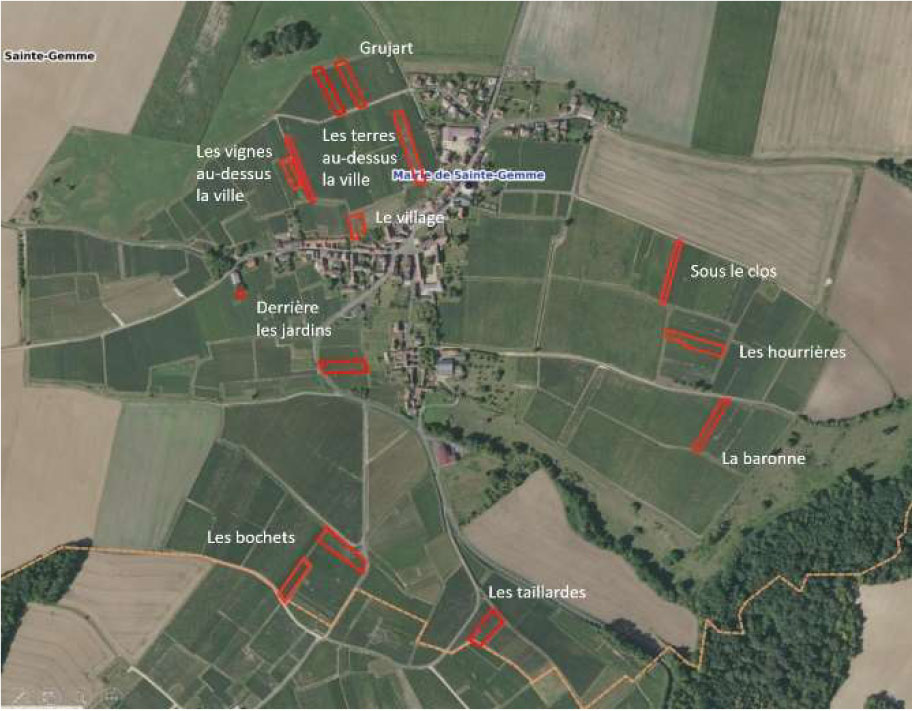 Aerial view of the Sainte-Gemme vineyard slope by Géoportail. The Francis Orban vines are circled in red.

On 4 July 2015, the “Champagne Hillsides, Houses and Cellars” were added to the UNESCO World Heritage List, in the category of living and evolving “Cultural Landscapes”! This is a recognition of their outstanding universal value.

The “Champagne Hillsides, Houses and Cellars” are presented as the cultural landscape which gave rise to the wines of Champagne, and which include all the production, development, and distribution work dedicated to Champagne wines that has been transmitted and preserved in the 319 municipalities of the AOC Champagne area.

Spanning 514 km, the Marne is the longest river in France.

With its source in the Langres plateau (Balesmes-sur-Marne, Haute-Marne), it flows from east to west, joining the Seine between Charenton-le-Pont and Alfortville. The area around Sainte-Gemme is part of the Marne river basin, with the Fontaine des Prés stream, a tributary of the Semoigne, which itself joins the Marne on its right bank.

The Île de France plateau is split in half by the Marne, whose narrow width has created runoff in the form of small streams perpendicular to the main drain, forming a multitude of valleys that join the Vallée de la Marne. One of these is the Vallée de la Semoigne.

The Semoigne begins at the village of Romigny (216 metres above sea level). Fed by several tributaries, including the Ru de la Semoigne, the Ruisseau de la Fontaine des Prés, the Ruisseau de Champvoisy and the Ru de la Brandouille, it heads in a north-south direction and merges with the Marne on its right bank at Verneuil, after 16.8 km.

The Ruisseau de la Fontaine des Prés has its source near the village of Sainte-Gemme. It flows east and merges with the Semoigne (on its right bank) at Passy-Grigny (over 1.3 straight kilometres).

Note that this stream is rerouted twice between the RD 406 and the entrance to the village of Sainte-Gemme. While the average slope of the Semoigne is 8%, that of the Ruisseau de la Fontaine des Prés is 6%.

This small narrow stream, which flows through riparian forest, has a steep gradient and cuts deeply into the western slopes of the Vallée de la Semoigne. The vineyards that cover the slopes connect the valley to the water’s edge. The area affords excellent views of open countryside, which is characteristic of the vineyard area in Champagne. 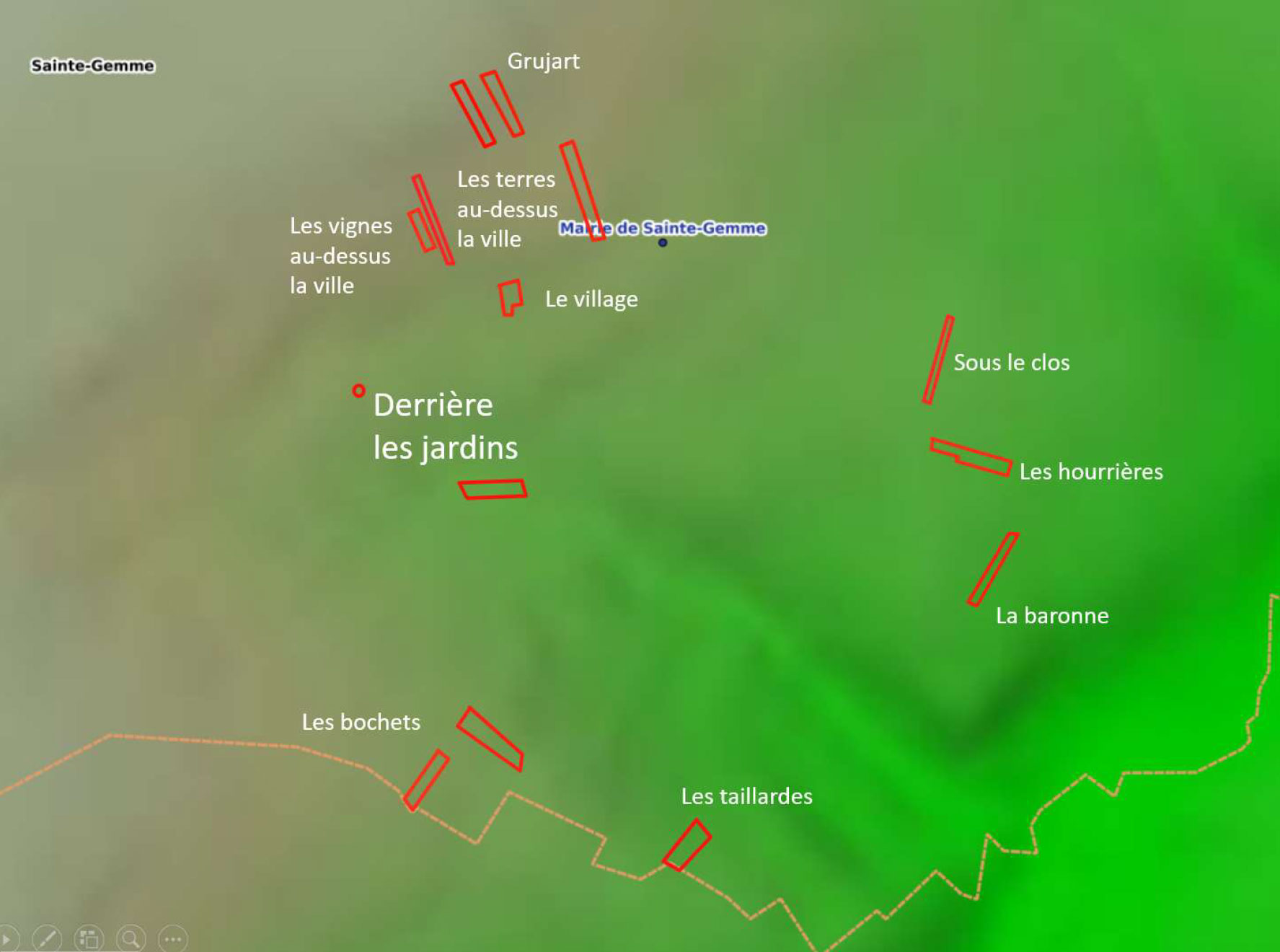 Sainte-Gemme wine-growing slope highlighted (Géoportail), with the location of the parcels belonging to Francis Orban.

The slope mostly faces south-east, and is split into two by a ravine, created by a fault. As a result, the slope is extremely asymmetrical from east to west.

The vines grow at between 115 metres and 220 metres in altitude. The map shows a slope carved into a cirque, with a central ravine which concentrates lines of springs in each layer of impermeable clay. The rugged slope faces various directions (south, south-east, east). The parcels follow the slope or are located at the knickpoint. The parcel known as Derrière les Jardins is rather sensitive. 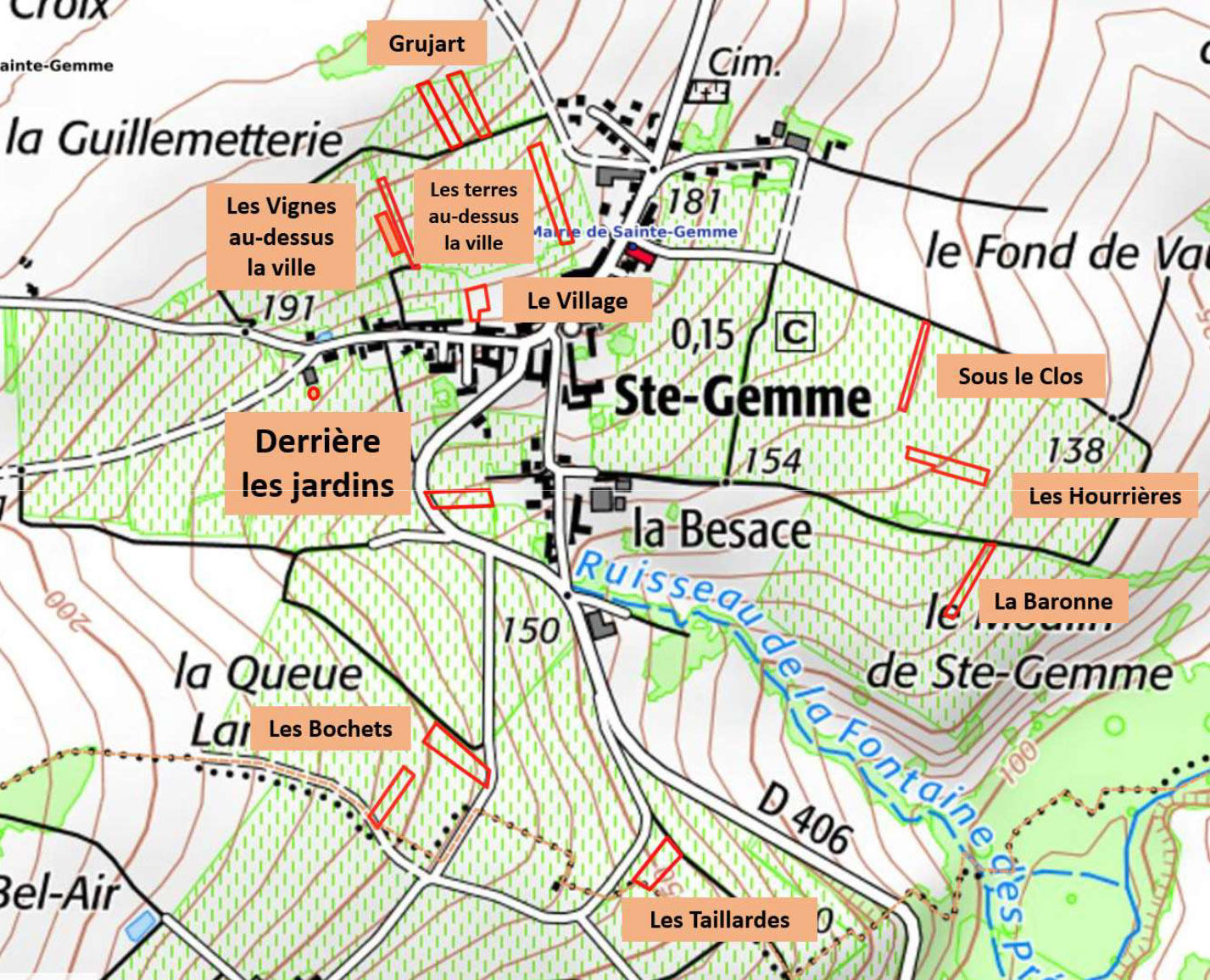 Sainte-Gemme is located upstream of the Vallée de la Semoigne, at about 6 km from its confluence with the Marne. This position explains why the land rises towards the Tardenois plateau and why there are more “recent” geological formations than those at the lower entrance to the valley. 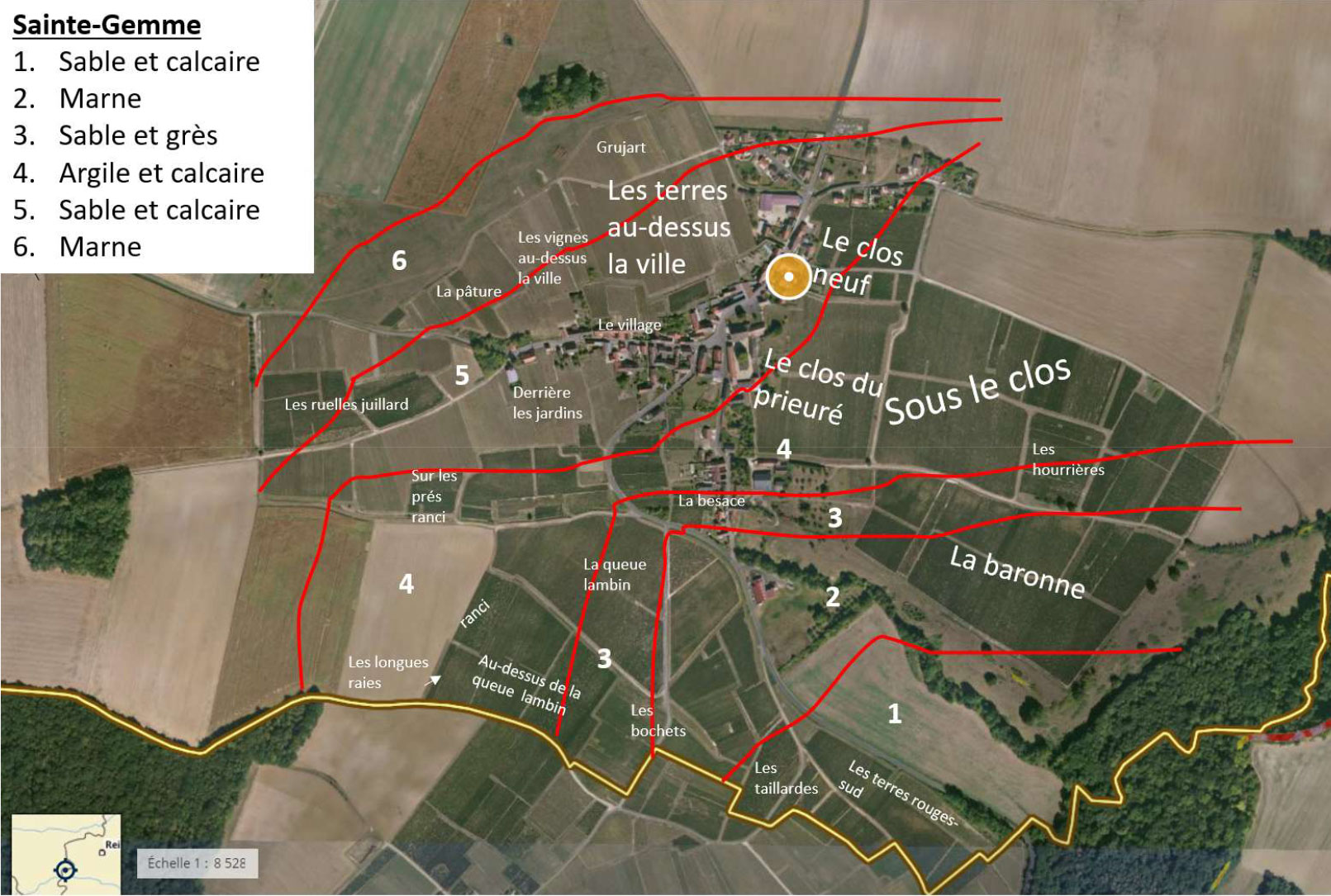 The base of the Sainte-Gemme hillside is made up of the most recent layers of sandy or more clayey limestone from the Mid Lutetian period. During the Upper Lutetian, the sea withdrew and gave way to a marl and clay lagoon-lacustrine system (including a layer of green clay which forms an aquifer).

Note that this stage, which marks the end of the vineyard at Leuvrigny at the top of the slope, is also practically the beginning of the vineyard at the bottom of the hill at Sainte-Gemme. So in this area there is a certain geological continuity between the two crus, even though the vineyards are far apart. The sea then returned somewhat during the Auversian stage and deposited sand which evolved into sandstone in some places. A lagoon-lacustrine system remained in the area. During the Marinesian stage, deposits were marly with lacustrine limestone and a layer of green clay. During the Ludian stage, silicified limestone was deposited which created steeper slopes, then marl. This stage marks the end of the vineyard in Sainte-Gemme. The plateau is made up of buhrstone in discontinuous beds, which rest on a very thin and uneven layer of light green clay. This formation is topped with plateau silts. 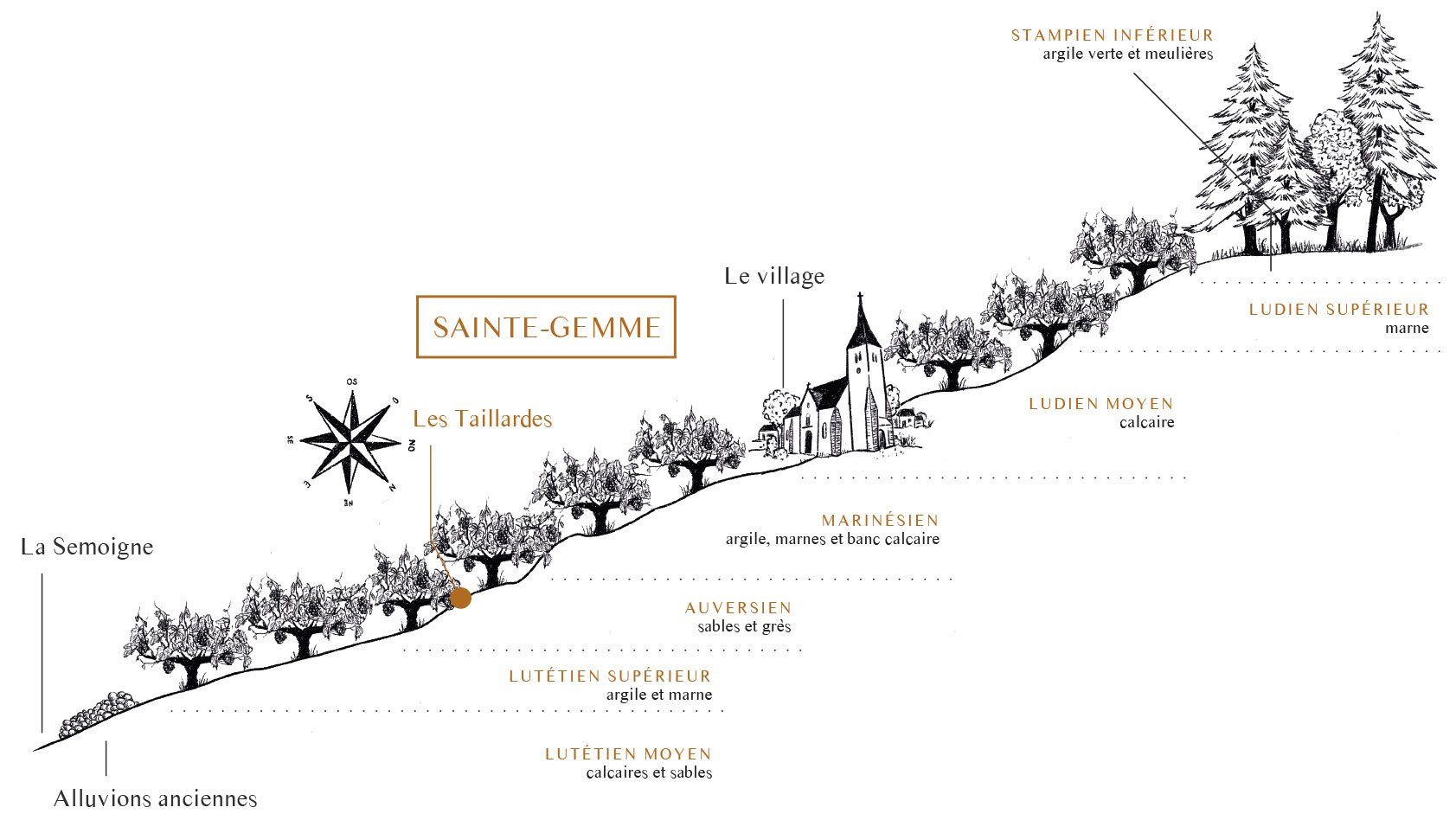 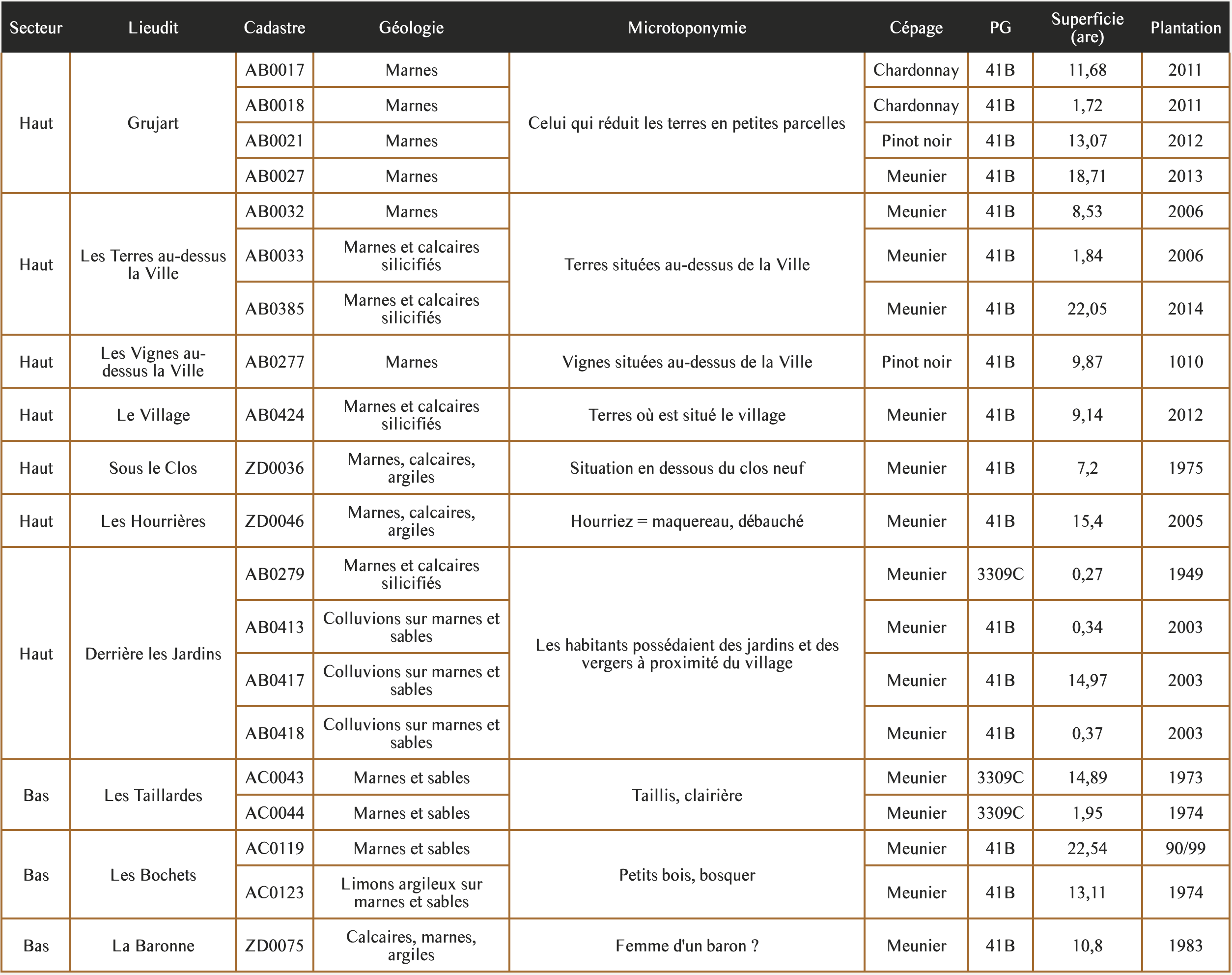 After studying the Francis Orban parcel in Sainte-Gemme, it is clear that the vineyard is 100% influenced by marl formations with some clay, and nuanced with layers of limestone and sand.

The Chardonnay and Pinot Noir parcels here produce fresh, fruity and rich, even full-bodied wines. They have a specific typical character.